What is Cast Iron Cookware?

Cast iron cookware is a combination of iron, steel, and other metals to make pots and pans that are durable and retain heat for longer. Generally, these are going to be for recipes that require certain browning effects to achieve the desired goal.

With a regular cheap pan, it simply can’t do this without sticking or damaging the pan in the long term. If you try to use something like a bronze pan, you’ll find out that the surface that touches the food will wear down faster. Cast iron pans have the privilege of making all different kinds of dishes at some of the hottest temperatures, while also not taking a major toll on their durability. It will take longer to achieve the temperature that you want. but the browning you desire is going to be a lot more consistent throughout the dish.

-Why is it called Cast Iron Cookware

It’s believed that the earliest traces of cast-iron cookware began a little over 2,000 years ago but there was no term for it. It’s not known how it was discovered or for the kinds of dishes the Chinese would use it for, but it would begin to spread to settlers from the Netherlands when they discovered it. It would then go to Japan and then many years later, people in the US would give it the official name of cast iron when people in the states used it.

The most obvious reason to name it this is to separate it from other kinds of cookware that used iron. Many pots and pans had iron in them, but there needed to be termed to separate them from the thicker ones that people use for long periods of time. It was a great cooking tool when it came to feeding a lot of different people at one time. The casting mold used to make the pot is also a distinguishing factor in how it got its name. This way people would the materials without seeing the cookware due to the materials used.

-When was it invented?

Cast Iron originated in China around 2,000 years ago. Many people today like to call it the Dutch oven, but many people agree that they are one that created it. The one that China made wasn’t up to the same quality as what the dutch would create, but they’re the first known culture to make cast-iron cookware.

In countries like Japan, certain kinds of cast iron kitchenware would be popular due to the appreciation of tea. Japan didn’t care for the pots and pans, even today, cast iron cookware is a rare sight in the country. In the Americas, it’s believed that cast iron cookware was in the region before Christopher Columbus discovered it in Europe. The region was a great place for making it due to the raw materials available and how easy it was to make the molds.

-What are its uses?

The most obvious thing to do with cookware is to cook, but the real question is how it differs from other tools in the kitchen. For one it’s able to maintain a very hot and consistent temperature, this makes it ideal for cooking a steak with a golden crust. It’s also great for meats that you want to bake in the oven because it will retain its heat better than other kinds of pots. It’s really good for breakfast because the heat retention makes for good browning on foods like sausages and pancakes.

It’s great for camping and the times you want to make cobbler. Usually, with this set of cookware, it’s really easy to set up a dish to be baked and not have to check up on it. The hit distribution is very equal and you’ll be left with a result that has a really good crust.

Taking care of this tool is what is going to make it last longer. Thankfully, you don’t have to put as much time into taking care of this cookware as more sensitive kinds of pots and pans. However, if you don’t take care of it, cast iron cookware can end up developing defects that end up making the food that you cook a lot worse.

The best thing that you can do is to take the pots and pans to someone who fixes up the flaws once a year. It’s going to take a while for these flaws to develop, but if you leave them unchecked. Even with constant cleaning of the cookware, you’re going to notice flaws when you constantly putting it in the oven at 500 degrees Fahrenheit. There is also the step of putting a light coat of tasteless oil and then baking the cookware in the oven. It will affect how the surface of the food browns for the next few used, but this is regarded as the best way to reset the pan.

Cleaning cast iron can be simple and different from the regular pans that you use in the kitchen. Using soap and water is going to be the best for the smaller dishes that you decided to cook. How hard it’s going to be will depend on how hot your cookware was and how much oil you put on the surface of your pans. It will be more difficult to clean than other kinds of pans, but if you notice any difficulty and can get it clean, soak it in water and it will be easier.

In the more extreme cases, you will need to get a pan scraper to make sure that food comes off of the pan. Generally, this won’t happen, but if you know that you can’t scrape off the food with a sponge, this is the logical next step. You should get able to get it clean without that much force, but if it’s more difficult than you through, you can use a copper sponge. If you really can’t get it off with pure elbow grease, coat the surface with baking soda and some water, and it will much easier to take off after a few minutes. 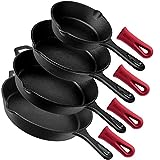